IS THE KAMPALA MEETING A BLESSING OR A CURSE FOR M23? 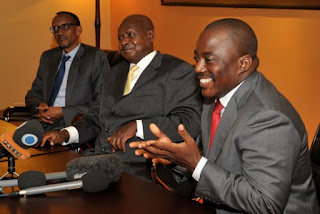 Finally Kabange has a big smile on his face after being given a second chance by the two giants neighbors with whom he was not supposed to mess up in the first place. Considering how president Kabila came sad, frightened, embarrassed and cold hearted, one wonders what did he hear that made him so relieved, and excited all of the sudden?
What? it is like he couldn't believe what he heard which likely that M23 was not going to go all the way to Kinshasa anymore? "really"? must has stated Kabila. But in diplomatic language the following was promised to Kabila after being a good boy for at least the last three days in Kampala, before he returns to his impolite foreigner minister Mende.
The joint brief statement issued Wednesday evening reads in full:
“President Yoweri Museveni of Uganda, Chairman of the ICGLR, President Paul Kagame of Rwanda and President Joseph Kabila of the DRC have been in a closed meeting in Kampala since Tuesday evening. The three heads of State have discussed how to address the deteriorating security and humanitarian situation in Eastern DRC after the capture of the North Kivu Provincial capital Goma, by the M23.
In solidarity with the Congolese people and their counterparts, President Yoweri Museveni and President Kagame made it clear that even if there were legitimate grievances by the mutinying group known as the M23, they cannot accept expansion of this war or entertain the idea of overthrowing the legitimate government of the DRC or undermining its authority. Therefore, the M23 rebel group must immediately stop its offensive and pull out of Goma. A plan to this end is being communicated to them.
The Government of the DRC on its part has made a commitment to look expeditiously into the causes of discontent and address them as best as it can.
Furthermore, a comprehensive and operational plan geared towards lasting peace and stability will be drawn up as a matter of urgency. The three heads of State welcomed the support of the Secretary General of the United Nations who dispatched a special envoy to Kampala to meet with them and discuss the matter… ”
IN RESPONSE TO THE ABOVE STATEMENT, M23 HAD THIS TO SAY (according to Reuters):
"Rebels in eastern Congo on Thursday rejected regional calls to withdraw from the city of Goma and threatened to press an advance until President Joseph Kabila agrees to peace talks."   Bishop Jean-Marie Runiga, head of the M23 rebel movement's political arm, told Reuters: "We'll stay in Goma waiting for negotiations," He added: "They're going to attack us and we're going to defend ourselves and keep on advancing."
Runiga said he did not think Kabila's offer to look into their grievances was serious.
"I'm not confident, because I've already waited for three months in Kampala for talks," he said.
Foreign ministers from the Great Lakes region on Wednesday ordered the rebels to leave Goma and halt their advance through a region mined for gold, tin, and coltan.
Runiga rightly stated that "Uganda and Rwanda had no authority to order the rebels to leave. M23 wanted to ensure the safety of civilians and the return of aid groups that fled Goma during its capture", he added as reported by Reuters.
That is right Mr. Runiga, they have no authority to order your army to commit a political and military suicide. They can advise, and not all advises are always right. It is up to you to take it or leave it.
The real question for most people is whether this unrealistic, biased and unfair demand from the three presidents for a complete withdraw from Goma by M23 can be taken seriously. What about all the deaths, injuries and other related sacrifices that M23 suffered, not to say millions of Kivu population etc?
Let's face it, after Goma and Sake, Bukavu is eagerly waiting with similar excitment the unchallenged arrival of ARC's troops. And now what? withdraw? what an insult? Everyone understands the pressure on these presidents wrongfully accused of supporting M23, but who cares what the most indifferent, morally corrupt the international community has to say on the fate of a people that have constantly ignored, abandonned, and sacrificed every time it needed the UN support since 1959?

The real concern is this: if the resolution is really serious, the question becomes: is this going to be a repeat of 2009 with Nkunda? are you kidding me?
Is Col. Makenga going to be unfairly sacrificed, held for a wanted criminal that he is not, for having stood for what he and million people believe to be a legitimate cause? Today he is held for a hero, and the Kampala summit is advising to make him a tomorrow fugitive?
Let's hope that he has learned a lesson from the past experience of withdrawing from Goma. After all, M23 is controling a territory almost as large as Uganda, only much richer in almost everything under the earth. So, why settle for less when you can have it all?

Oh, by the way, one more question hangs in everybody's mind: what the hell is M23 going to do all the way to Kinshasa? to overthraw Kabila? then what? put Mr. Tshisekedi on power? after all he is the one who was legally elected by the congolese electorate.
But why would M23 reward a hateful, ungrateful and irresponsible political coward such as Tshisekedi and his people who would never sacrifice for what they believe in? what support have they shown to M23 other than hateful and denigrating comments?
What will M23/ARC get in return should it succeed to reach Kinshasa and overthraw Kabila? well, everyone knows: it is the same old haineous, corrupt, irresponsible, incompetent, nepotism, and anti-semitism based system where Tutsis would always be viewed as vilains. After all, isn't insanity, doing the same thing over and over while expecting different result. So, why would M23/ARC repeat the experience of 1997 with AFDL, and with RCD only to get the same result?  The people of Kivu deserve more. Now it is a do or die matter!!!
However, if M23/ARC is not comfident enough to install its government in Kivu, and declare an independent state of Kivu, then it has not learned any lesson and may as well not just withdraw, but surround and allow themselves to be treated as criminals. But who in his right mind would do that? Certainly Not Makenga!

Let me conclude with an advise for M23 ( although not asked to), and it was well said by my correspondant collegue as he rightly  pointed out: "I think that Africa is heading toward a redrawing of the new boderlines and new creation of new states or nations beyond what the European Colonialists did at the 1884 Berlin Conference that demarcated Africa for their own colonial interests. The colonial masters left behind a very big mess and now its time for Africans to solve it and clean it the African way and the future will live to tell the outcome of these african conflicts and solutions."

Col. Sultan, take courage, the people of Kivu are behind you all the way to the new begining!