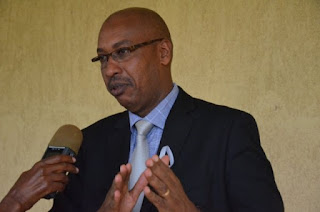 One of the hot news in the great lakes regional politics is the disruption of relations between Rwanda and Burundi, where tension is highly being felt by people from both longstanding friend countries. It is now comfirmed that the Burundian Minister for foreigner affairs Mr. Desiré Nyaruhirira in the name of his government has declared Mr. Rugira, the Rwandan ambassador in Burundi a ``persona non grata``, meaning an unwelcome person in Burundi. In other words, the Rwandan ambassador has been kicked out in Burundi.
According to artcle 9 of the Vienna Convention on Diplomatic Relation, a country has the right to declare any ambassador of any given country in its territory to leave without having to expain itself, the diplomate in question becomes a persona non grata. This is the case now for the Rwandan ambassador in Burundi.

This however, is quite concerning for those who know the politic of the great lakes region, especially regarding Rwanda`s response in the past to countries that have tried this act of disrespect and provocation. President Paul Kagame is well known for his tough stand to anyone who dares show contempt towards Rwanda. One can remember when Belgium closed Rwandan ambassy`s bank account in Belgium, the following days Rwanda did the same to its counterpart who probably did not see this coming. The memory of Germony ambassor declared persona non grata in Rwanda after Germany arrested Rose Kabuye. It is worthy noting that if Rwanda took that bold responses to powerful countries whose aid Rwanda needed so much for its functionality, but for the sake of its Akaciro (dignity) was ready to sacrifice, how much and strong Rwanda's reaction would be on Burundi, a much weaker and neighoring country.

Not to mention that rumors has it that Burundi has been hosting the members of FDLR, (former genocidaires) responsible for the 1994 genocide against Tutsis, and is said to support them in their evil plan to attack Rwanda.
Although Burundi holds a similar accusation against Rwanda for hosting Burundian opposition group, closing Rwandan ambassy in Burundi could be deadly for President Nkurunziza despite his supposedly Tanzania and French support.

Moreover, needless to say that the Burundian government has lost confidence and support of the great majority of its population not only prior to a contested presidential election, but also afterof. Since Mr. Nkurunziza's 3rd term election, Burundi has continued witnessing mass killings of its population in many area of the country.
Are we at the verge of the apocalyptic prophecies awaiting our region once again! God forbid.
Only God know what awaits our great lake region.

Editor
Posted by Minembwe at 10:07 AM No comments: