ROSE MAPENDO, NOMINATED BY A HOLLYWOOD STAR AS ONE OF HUMANITY'S HERO!

As the world marks the World Refugee Day on June 20, Rose Mapendo, a munyamulenge woman, victim of torture and survivor of genocide against Banyamulenge in Congo, presently resident of United States of America, was awared a humanitarian award as a hero. Mrs. Susan Sarandon, a Hollywood Movie Star recommended Rose Mapendo as one of the Heroes to be awarded the Humanitarian of the Year's Award.
This is an indication that even good deeds by humble and regular people are sometimes recognized. To have a Munyamulenge woman at the stage of World and International Media is something that only happens in America. No wonder America is the greatest of what humans have to offer in this universe!
It is not only the few unfortunate bad actions such as unjust wars, and the support of world dictators. But, America is still the beacon of hope for the world's population. It is still the place where good is recognized and encouraged. A place that still offers hope for millions of unfortunate people who still found a reason to hope and dream despite all diversities. Where else a world renown star would find time to humble interact with a refugee with whom they rarely have anything in common? This only happens in America! and Mapendo was fortunate to be at the right place, with right people at right time.
Much credit however, must be given to Mapendo International, an organization that has devoted itself to save thousands of refugees including Banyamulenge refugees usually ignored by many so called humanitarian organizations staffed by many Hutus and Congolese extremist who take pleasure in denying the cases of Banyamulenge people. Mapendo International has proven to be the only organization so far that is still not influenced by hutu and Congolese extremist's lobbying against Banyamulenge and tutsi refugees in general. Had not been Mapendo International, Rose would not possibly be alive or at least known to day.
Mrs. Susan Sarandon who is also one of American social activists Stars nominated Rose Mapendo after learning about Rose's "dedication to helping refugees around the world". Please click on the link below to view Rose on CNN:
http://www.cnn.com/video/?JSONLINK=/video/bestoftv...
Check back for an exclusive interview with Rose Mapendo and Journal Minembwe next. 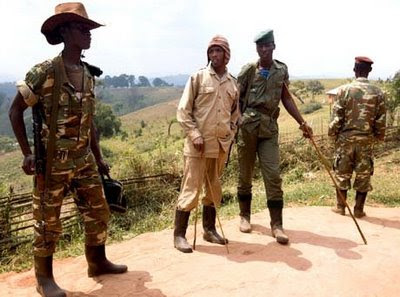 ROSE MAPENDO CHOSEN FOR HUMANITARIAN OF THE YEAR AWARD 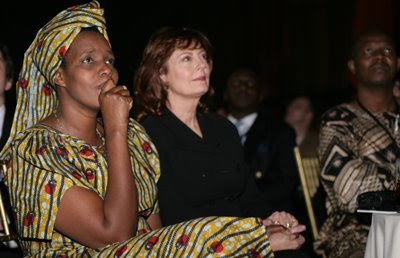 Minembwe, DRC — The United Nations High Commission for Refugees, and the government of the United States of America will honor award-winning Munyamulenge woman, Rose Mapendo on June 20th, 2009 with the Humanitarian of the Year Award in Washingston, USA. USA secretary of State is among the honorary guests and key notes speaker.
As a respected and renown prisoner survivor and victim of the Congolese torturous government ordered massacre, cruel and inhumane harsh treatments, Mapendo’s impassioned survival testimony and advocacy work has cast a spotlight on a range of vital issues—most notably her courage to testify about her traumatic experience in the Congolese prison where a number of Banyamulenge women, children and men were wrongly imprisoned and many more massacred by the Congolese army in 1998 for simply being Tutsis.
Mapendo and a handful of her inmates Banyamulenge remained in the hell-like cells tortured day in day out, for one full year at the government’s order without being charged, until a God sent man known as Sacha, a humanitarian american man learned of their fate and came for their rescue. —As a survivor, Mapendo, a Banyamulenge woman hardly literate, became an advocate of human rights abuse, and joined the Mapendo International (an organization named in her name) and got involved in fighting for the rights of underprivileged. The United Nations High Commission for Refugees, which could not rescue Rose and her collegues at the hour of their greatest need will honor Mrs. Mapendo for her highly emotional and sensitive testimony that she courageously shares some of the most glaring humanitarian tragedies into focus for the American public and for her ongoing advocacy work on key Banyamulenge issues.
“Through her extraordinary dreadful experience in Congolese Jail, where Mrs Mapendo not only witnessed the murder of her husband and her neighbors, but also gave birth to two twins, who miracularsly survived. This was a total humanitarian crisis for all the Banyamulenge prisoners, but much so for a woman who later gave birth to twins in that hell, without any kind of assistance and in the most dangerous place__a jail cell, extremely dirty, full of human decays, excrements, and thousands of gems and viruses. Not to mention that prisoners will go weeks without food or water, and were naked, and usually beaten.
Mapendo has brought the immediacy of Banyamulenge suffering into the minds of millions of listeners around the world,” states Muhoza Hakizimana, Executive Director of International African Child Relief and Peace Foundation of Canada who immediately went to visit Rose and her friends in Arizona upon their arrival in USA. "What is even more amazing about Mapendo is that where many other victims might end with the tragic and traumantic memories, Mapendo pushes further to show that there is hope for her people Banyamulenge, and humanity in general. Her confidence in humanity is possibly what gives her courage to continue living and inspiring others to do so. Through her testimony Mapendo continues to help galvanize public support for effective humanitarian action". added Muhoza.
“I’ve been saved by human being who never knew me, and who have been extremely good to me and my children. They have given me and my kids a reason to live and be hopeful once again. This kind of love is what has impressed again about people, after the kind of evil deeds Congolese army had done to us” said Rose Mapendo, who is now a resident of Phoenix, Arizona. (USA) Mapendo, argued that what Sacha and his group have done for them (her and others survivors), is what she finds more extraordinary, and more impressive act of love and of God. It is these kind of people among us who are the first to respond when tragedies unfold, and work tirelessly to ensure that people like me have a fighting chance to get back on their feet, that make the world a better place. Not people who kill innocents, imprison mothers and babies with no reason and claim to be leaders of people.
Honoring Mapendo as a humanitarian award winner, is not just symbolic or meaningful to Rose, but it's also a signal of being heard by all Banyamulenge people whose suffering is embeded in Mapendo's testimony.
Finally, the suffering, injustice and oppression of Banyamulenge people by the Congolese government is getting known to all and acknowledged by the world.
It is also a message for the Banyamulenge people and all other minorities who have been subjected to such cruel acts of their government that no matter how overwhelming, our injustice may be, it’s important to remember that there is still hope, you too can become part of that hope.
As the first Munyamulenge to receive this prestigious awardRose Mapendo has raised public awareness of human suffering of Banyamulenge which is often neglected by the media; she has brought international recognition to the valiant efforts of hope organizations such Mapendo International ; and by testifying about her experience she brings understanding of humanitarian issues which will hopefully make a lasting contribution in the fight against injustice and human rights abuse.
By
Akim Muhoza
Journal Minembwe
Posted by Minembwe at 11:45 AM No comments:

The Last Survivor: A Moving Story of Munyamulenge youth now in USA

This is a story of a people denied the right to live in the country that denies their historical existence. Semahoro's story unfold everyday reality of his people_the Banyamulenege in Congo. A country now run on the principles of hate, bigotry, xenophobia, and a constant instict to kill. Click at the link above to read Semahoro's story. To view and listen to the testimonies of survivors of Holocaust, Tutsi genocide, and Darfur, please click on the link below:
The Last Survivor
Posted by Minembwe at 9:38 AM No comments: