AGATHA RWASA, A TRUE GENOCIDAIRE IS A PRESIDENTIAL CANDIDATE IN BURUNDI, SHOULDN'T HE BE IN JAIL INSTEAD? 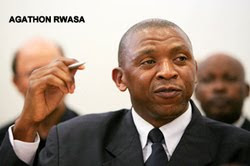 What kind of world do we really live in if notorious criminals, genocidaire such as Agatha Rwasa is being allowed to run for president of a country ? No wonder the majority of international global community have lost confidence in the so called International bodies such as United Nations or the International Court of Justice.
It is now confirmed that Agatha Rwasa is one of Burundian Presidential Candidates. We will not cease to shout loud and clear that the genocidaire Agatha Rwasa must be brought to justice over his crimes against humanity. As a sign of his arrogance, Rwasa has confessed himself as being responsible for the 2004 Gatumba genocide that slaughtered 0ver 156 Banyamulenge children, women and elderly refugees in their camp.
It was on Friday, August 13th, 2004, when at least 166 Banyamulenge Tutsi civilians were massacred at the Gatumba refugee camp in Burundi. The victims were burnt, shot, and hacked to death with machetes. All were of Tutsi ethnicity. Most were women and children. Their traumatized families were almost exclusively members of the Banyamulenge tribe, who had earlier been forced from their homes in the southern Kivu region of the Democratic Republic of Congo (DRC).
Two days after the massacre at the Gatumba Refugee Camp in Burundi,

Burundian Hutu militia leader Agathon Rwasa openly claimed responsibility on French International Radio, RIF. Belgian lawyer Philippe Reyntjens at August, 2004 called Rwasa on the phone and asked him if he was the one responsible. Rwasa proudly admitted, “Yes, I am responsible for killing the Banyamulenge Tutsi in the camp.”

Why has this man not been brought to justice? I ask all those who read this, and the international community as a whole, to help bring this man to justice on behalf of his innocent victims. Agathon Rwasa is believed to live in Burundi. The survivors of the massacre cannot find peace or security while he lives freely in the same country. If he and the organization responsible for the massacre in 2004 are not held accountable, they will be able to commit atrocities such as this again in the future.

If Burundian people and the world at large allow this criminal to take power as a nation's president what message does this send to the world of criminals? that it does not matter to kill thousands of innocent people?

Please help in advocating for Justice to be done. Agatha Rwasa is a genocidaire, he should be in jail not in presidential palace!

AKIM
Journal Minembwe
http://www.mulenge.blogspot.com
Posted by Minembwe at 11:25 AM 1 comment: