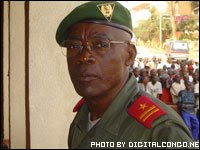 Chinese Will Link Congo Via Fibre Cable, Who will Do the Road?

The Following article was published by the balancingact-africa.com/news and is worth reading by other Congolese who may choose to believe in a possible development in Congo. You never know. Lazarus was dead, but he lived again, so can be Congo. But, is the fibre cable the needed solution? may be it is one of them or it will just be another example of monies ending up in the tummies of the big Congolese ruling elites. Wait and see, rather read and wait:

DRC: Work now under way to link the country by fibre to its neighbours and the world
One of Africa’s largest countries, DRC, has taken the first towards creating a fibre link to its neighbours and the outside world. A little-noticed announcement was made at the end of last month by the Vice-First Minister for Reconstruction that gave the green light to start construction work on a fibre optic link from the capital Kinshasa to the coastal town of Muanda. Russell Southwood looks at the potential impact on the country’s connectivity.
The Vice First-Minister for Reconstruction Emile Bongeli announced at the end of February the first phase of construction of a national fibre backbone with the building of a Muanda-Kinshasa link in partnership with China.
The project is scheduled to last nine months and will cost US$31 million. The link will be 651 kilometres long and have a capacity of 10 Gbps. The project is being managed by the incumbent l'Office congolais des postes et télécommunications (OCPT).
Its Administrateur Directeur Technique (ADT) Placide Mbatika said that it would allow the cost of telephone calls to be reduced “sensibly” and that all operators would be able to connect the proposed national network. He said that telecommunications was among five important public works for the country. To illustrate his point, he cited the case of the country’s universities which could be connected properly to the Internet and the use of surveillance cameras on roads and other locations.
Because of its impact on other sectors of national life, telecommunications was one of the key indicators for economic growth because it helped generate wealth, created employed and was key factor for the integration of different groups within the country. It was also the initiator of a range of new “value-added” services:”OCPT will make this backbone the national reference network.”
The second phase would see the deployment of fibre from Kinshasa to Kenge in Bandundu province west of Kinshasa. From this province, the cable would go to the mining province of Katanga via Kasaï. No details were announced for the routing but the path to Kolwezi passes not too far away from Mbuji-Mayi.
After Kolwezi, it would go north to Bukavu (Sud-Kivu province), Goma (Nord-Kivu province), Kisangani (Orientale province), Mbandaka (Equateur province) before having come in a huge circle back to Kenge. It was noted that the cable through Katanga province will pass through Kasumbalesa which will allow a connection to be made southwards down into Zambia.
This is a huge civil works project in a country that has few roads beyond the capital Kinshasa. The link to Muanda will be the easiest to build and with Chinese contractors is likely to be completed close to the proposed schedule. However, the scale of the proposed nation-wide ring is enormous and is likely to take 3-5 years to complete. Meanwhile it is likely that other fibre operators may connect up to Lubumbashi from Zambia.
But when the link to Mudanda is made, it is a under 100 kilometres to Pointe Noire, the Capital of Congo-Brazzaville, Angola’s Cabinda enclave and Angola itself. It will then become relatively easy to connect into the festoon cable Angola is currently laying and to on-connect to Pointe Noire.

Source: genocidemadeinfrance.com
Posted by Minembwe at 2:49 PM No comments:

The following is a brief portrait and background of genocidaire Abdoulayi Yerodia, the former vice president of DRC and the inciter of genocide of Tutsis in Congo. For the sake of justice and history sake, we will be publishing the responsible of genocide of our people even if the world has decided to turn an blind eye on them. They will never hide from the eye of global cyber community. This is our share of justice. Please read below who is the shameful vice president of a country called itself "democratic".
Name: Abdoulaye Yerodia Ndombasi
Surname: Yerodia Ndombasi
First Names: Abdoulaye
Title: Former Vice-President
Date of Birth: 15 Jan 1933
Country of Birth Congo: (DRC)
Political Affiliation: Genocidaire
Accused for: The crime of genocide
The following are some of the positions he held since 1997, although his current political position is not yet known to us.

Who is the accused Abdoulaye Yerodia?

Known as Abdoulaye Yerodia Ndombasi, he was born on the 15th of January 1933 in DRCCongo). He has been a high ranking official in the current government of the Democratic Republic of the Congo which was led first by Laurent-Désiré Kabila and now by his son, Joseph Kabila. He was foreign minister under Lauren-Desire Kabila from March 14, 1999 until late 2000. In 2003 he became one of the four vice-presidents of Congo under the transitional government as mandated by a peace settlement with rebel groups and opposition parties, after having been nominated in April of that year by Joseph Kabila, as the vice-president representing the Kabila government.

What crime did Abdoulaye Yerodia commit?

Let us clearly state the crime committed by Yerodia. Mr. Yerodia is accused of committing a crime of genocide under the convention of the prevention and punishment of the crime of genocide in its Article 3 which states that "The following acts shall be punishable:(a) Genocide;
(b) Conspiracy to commit genocide; (c) Direct and public incitement to commit genocide; (d) Attempt to commit genocide; (e) Complicity in genocide. The accused has bleached article 3 under section (c) by directly and publically inciting the killing of Tutsis, and under section (e) complicity in genocide as it is clearly demonstrated in his political actions.
Yerodia committed a crime specifically punishable under the UN convention adopted in its Resolution 260 (III) A of the United Nations General Assembly on 9 December 1948 as clearly stated in article 5 "Persons committing genocide or any of the other acts enumerated in Article 3 shall be punished, whether they are constitutionally responsible rulers, public officials or private individuals" Yerodi is such a person and must be punished by the ICJ otherwise, the international law is just a moquery.
In 1998, Yerodia publicly incited the Congolese population to kill members of ethnic Tutsis tribe simply because they were thought to support the government of Rwanda, which was supporting the congolese rebelles.

What has been done so far about Yerodia's case?

Yerodia was involved in a precedent-setting case by the International Court of Justice (ICJ).
This case, known as "the Arrest Warrant Case"; unfortunately the case was decided in Congo's favor. It is said that "During the proceedings of the case, the Congo dropped its jurisdiction arguments and the case was decided solely on Yerodia's diplomatic immunity as foreign minister. However, some human rights groups saw this decision as a blow to universal jurisdiction".

In fact the Kingdom of Belgium had issued an international arrest warrant based on a new Belgian law ( known as the Belgian Universal Jurisdiction Law, since repealed ) allowing Belgian courts to prosecute international crimes, charging Yerodia with inciting genocide.
The unfortunate thing in all this is that the Democratic Republic of the Congo responded by filing an application against Belgium to the ICJ, claiming that Belgium did not have jurisdiction and that Yerodia, as foreign minister enjoyed diplomatic immunity. This clearly shows how not only the Congolese government cares more about protecting its criminal officials than enforcing the law, but the lack of interest by the ICJ and the Belgium government which decided to shamefully drop the case against Yerodia. This is quite inacceptable and this case must be reopened. There must be an arrest warrant made against Yerodia for crime of genocide if the ICJ is to have any meaning at all.
We are only asking the international community and specifically the International Court of Justice (ICJ) to live to its commitment.

The blood of innocents cry for justice and we hope that justice will be served finally served.

To listen to Yerodia's speech inciting genocide please listen to the video below this article.

Akim
Journal Minembwe
Posted by Minembwe at 10:09 AM No comments:

THE BLOOD OF INNOCENT BANYAMULENGE CRIES FOR JUSTICE

Genocide against Tutsi in Congo1
by kinjugu

We have the obligation to continuously ask for justice in the name of our people, Banyamulenge and other Congolese Tutsis who have been massacred, slaughtered and painfully and selectively killed in different places, at different time in the Democratic Republic of Congo and in Burundi. There are key prominent congolese figures such as Abdulayi Herodia former vice president of DRC, and Agatha Rwasa president of FLN in Burundi who prided themselves for killing and inciting the massacre of Congolese Tutsis.
We hope that the International Community will wake up and pay attention to this injustice done to Congolese Tutsis. The named political leaders responsible for inciting the massacre of thousands of people are enjoying their freedom as if it is acceptable to kill whenever and whoever they want with no consequences.
We have posted the above video as one of the key documentation evidences of this unspeakable gruesome crimes. We owe it to the victims to ask for justice, not revenge but justice.
The International Criminal Justice should consider ending its indifference to world's poorest and live up to its mandate to prosecute all those who have committed crimes against Humanity. Yerodia Abdulay and Rwasa must be prosecuted for their crime against humanity.

Akm
Journal Minembwe
Posted by Minembwe at 9:48 AM No comments: