The UN has recently expressed concerns about events in the DRC So have we. Over the last week we have been receiving refugees from the eastern DRC. It’s not a good thing and it’s not a new thing. Of course the bigger issue as far as Rwanda is concerned is the stability of the region. That is our priority in our relationship with the DRC and within our relationship in the region. We have made pledges of collaboration to keep this relation stable after the tumultuous time we had right after the genocide, so there is a concern. We have now (May 8) close to 4,000 refugees that have crossed into Rwanda from eastern DRC. We are working closely with the UN agencies and local municipalities, and we are trying to support as much as we can. But of course we would like this situation to end. Rwanda is already home to approximately 55,000 mostly Congolese-Tutsi refugees. Are the new refugees victims of ethnically based violence or is this a different phenomenon? These refugees are fleeing fighting between the Congolese national forces and the mutiny of former CNDP in the region. The population is caught in between and the closest exit is Rwanda. What will happen to these people? What will happen, we don’t know. But as a neighbor and as a country that has had close cooperation with the DRC in the last four years, we would want to continue having peaceful relations. We are very concerned about the populations near the borders, especially this region that has not been quiet for the last many years. What we hope would happen are for the hostilities to stop and that we will be able to repatriate the refugees that are in Rwanda. As you’ve said, we already have more than 55,000 Congolese refugees in northern and north-western Rwanda. We hope they’re not forgotten and especially we hope the international community doesn’t think the issues of Congo would come in and go as fashion. Somebody has to think about the more lasting, the more comprehensive solutions to what is causing this instability and ultimately how these innocent people are losing their homes and sometimes their lives. We, the international community, need to do something about it. And of course Rwanda as a neighbor of the DRC will always play its role. But what we find regrettable as a nation and a government is that the so-called international community is really not looking for lasting solutions. 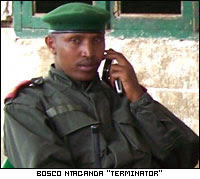 Is Rwanda playing any role in the DRC right now? Rwanda is of course always in dialogue with the DRC and our chiefs of defense staff did meet recently because of concerns over stability. We want hostilities to end and we want to figure out how to deal with two main issues. One is the presence of the FDLR, the genocidal forces that left Rwanda right after the genocide, near our border. That’s an issue that’s always there and of course the FDLR is the number one concern in terms of our stability. We have to discuss that because they are part of the fights, the battles, the alliances, the breaking of alliances, the mutinies there in that region. We want to know that our stability is not going to be threatened by the genocidal forces that are on the DRC side, but also importantly we’re talking about Congolese citizens who are fleeing to Rwanda. So we have to talk about how to make sure this situation seizes and we go back to our bilateral cooperation. We’ve had a very good collaboration [with the DRC] in terms of security and defense. We’ve had very good diplomatic talks amongst us. So that’s the context in which the meeting took place. Is it on the table for Rwanda to take military action inside the eastern DRC? Of course not. Rwanda would of course do everything to make sure our territory is protected and our citizens are protected. We went into Congo the last time in a mutually arranged agreement to go after some of these militias inside the Congo that were causing instability. If Congo needs Rwanda’s collaboration we will discuss it, we will figure that out, but Rwanda has no intention of sending its troops into Congo to solve Congolese problems. A letter sent out from 142 NGOs/groups to US Secretary of State Hillary Clinton mentioned that in the past Rwanda has supported Bosco Ntaganda and it called on Rwanda to no longer support him and to not harbor him. Did Rwanda once support him and what’s the situation now? Let me first give the context. Bosco Ntaganda is a commanding officer of the army of the DRC, so I think a number of people forget that Bosco Ntaganda, whether he is of Rwandan origin or not, is an officer of the DRC. So anything that has to do with Ntaganda has to be decided in the DRC, with the DRC authorities and with his commander-and-chief. The letter says a number of important things, including that there is a problem of management of these army officers. Ntaganda is one of them. But is the issue Ntaganda or is the issue stability and peace in the Congo? A decision has now been made. The international community, the International Criminal Court (ICC) wants Bosco Ntaganda. His commander-and-chief said he should be arrested. That’s not Rwanda’s issue.

Would Rwanda harbor him? Of course not. He’s on Congolese territory, he’s wanted, his country wants him arrested. The international community has more than 20,000 troops in the DRC. How does Rwanda come in? I want to stress the fact that if we don’t place the issues where they belong, we will never have stability in this region. Can you speak to us about Laurent Nkunda? Is he in prison? Is he in a house? What’s the program for Laurent Nkunda? This is a very interesting question you’re asking because the Bosco Ntaganda issue is Déjà vu all over again. We have Laurent Nkunda who’s in Rwanda; he cannot be in prison in Rwanda because he has committed no crime in Rwanda. But we thought when he fled to the Rwandan side it was important to keep him so that we get him out of the picture to give a chance to stability in the region, and it has worked since 2008. Now Rwanda is stuck with Nkunda. Nobody wants to take him back. We can’t send him back to the DRC because the DRC still has the death penalty. Rwanda doesn’t and Rwanda would not extradite anybody to a country that has the death penalty. So Rwanda here is stuck with Congolese problems. To have lasting peace in our neighborhood there must be a stop to putting so much attention on individuals, whether they deserve attention or not. These individual issues are not the real issues, which is why if it’s not Nkunda, it’s Ntaganda or somebody else. But even if you remove them does that really bring stability to the DRC? We would like to see some serious discussion about what it will take to get stability in the region. Rwanda is always ready to play its part; we work with and talk with the DRC bilaterally. But we, the international community, can’t allow the eastern DRC to be the bedrock of instability and a region that is sort of abandoned to itself until someone comes up with a Kony2012 type of campaign. In the case of Ntaganda, does Rwanda support him going to the ICC? Rwanda actually has issues with the ICC, and that is why we are not party to it. It’s not because we are against the court or the idea, but because we feel there has to be some kind of discussion about international law, universal jurisdiction and Africa. That has not been the case yet. So we’ve expressed our reservations because we feel there has been abuse in the international system in terms of law and Africa and African leaders. We will support justice in any way, but we believe the way justice is being dispensed for Africans is not fair. It is something that we have brought to the AU, and to the attention of the UN. Right now it’s frozen, it’s pending, but we hope this discussion will be revived again. We do believe that Africa is targeted by the ICC, and until that discussion has taken place we cannot sign onto the ICC. But Rwanda is not the decision maker, not in the DRC, not in the ICC. We are not disputing whether Ntaganda should go to the ICC or not. If Ntaganda or any other commander in the DRC or anybody else has committed crimes and the country has subscribed to the ICC, that’s not Rwanda’s decision. We know we have our own issues with the ICC. We’ve expressed them very clearly. Can you explain why the individual nominated to be the ambassador to Rwanda from France was rejected? Some reports said this was on account of his relation’s to Alain Juppe, who is not a popular man in Kigali. Rwanda does not deal with France on an individual basis. There has been a decision by the two countries to normalise relations and kind of get back together, and when we did that we had long discussions and we knew that trying to bridge the gap over the last many years was not going to be easy because there were very serious issues between France and Rwanda in the first place. But it should be clear that there is no obsession about Alain Juppe in Rwanda. He’s the foreign minister of France, he’s doing his work, his government and president picked him, he wasn’t picked in relation to Rwanda. He’s the French foreign minister and he will do the job his government wants him to do. So for us, we will continue to work with France. When there are issues, like an ambassador that we don’t think is the best candidate to be ambassador here in Kigali, we will express it to the French government as we have done. These things happen. Ambassadors get rejected. The thing is most countries don’t want to make it very public, but it’s nothing unusual.
Posted by Minembwe at 8:18 AM