COLIN POWEL URGES THAT THE US OWES HAITI BILLIONS $ 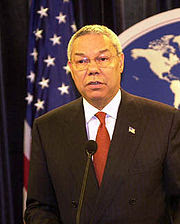