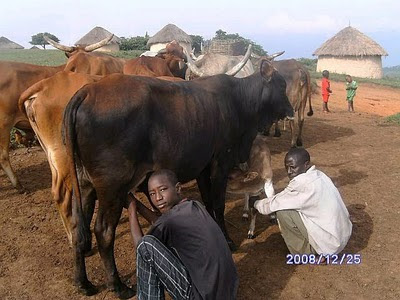 As was reported recently in our news, the security continues to deteriorate in the high plateaux of Bijombo, district of Uvira, where most civilians from the Banyamulenge ethnic group are still victims of the ongoing conflicts in the region. These people, mostly pastoralists, have nothing to do with politics. Those who managed to escape, however, still face the same situation where their killers followed them even across the borders in the neighbouring countries like Burundi where many hundreds have been slaughtered in a refugee camp in August 2004.

Some of those who claimed responsibility in the killings, like Mr. Agathon Rwasa, still move around freely. Instead of being arrested and judged for his acts, credible sources say that this experienced killer, Agathon Rwasa, has found refuge in the Democratic Republic of Congo. The Banyamulenge community feel threatened by his presence in the region.
Last time we reported a transfer of some the FARDC army commanders in the high plateaux of Bijombo, causing increased fear in the Banyamulenge community of more insecurity and threats carried out by the government troops in their villages. This is seen by many as the continuation of some politicians’ plans, like ANZULUNI BEMBE  from 1993, to exterminate the Banyamulenge under the pretext that they are ‘foreigners’ or just for who they are, like what Agathon Rwasa has done in Gatumba (Burundi) in 2004.

According to eye witnesses, there have been fights opposing government troops to FRF since Friday 03 December 2010 which took place in many villages in the area such as Irango, Kanyaga, Mugethi. Murambya  and Kagogo where barbarian acts against civilian populations (arbitrary arrests, rape,etc.) are reported to be taking place.
Many people have also been wounded and houses have been burned down by FARDC troops. The whole area has no hospital, thus making it impossible to provide any medical help. There is also fear that HIV/AIDS may spread in the region as a consequence of the situation.

A day after 03 December 2010, that is 04 December, reports from the region say  that fights are spreading in the neighbouring villages of Bijombo, Ishenge, Rusuku, where so much damage has been done and populations have been displaced.
All those innocent continue to call on MONUC to intervene and help them return in their homes and be protected as any other Congolese citizens. The government is accused of being responsible for stimulating hatred and conflicts among ethnic groups. Human right organisations and others such Red Cross, UNHCR and religious organisations call on the head of states of the region and to  international community to help in solving this situation.