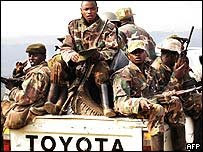 The Chief of General Staff of the Armed Forces of the Democratic Republic of Congo, FARDC, General Didier Etumba, addressed the members of legislative Assembly (MLAs) in Bukavu on Monday, on progress report of the operations Kimia II launched on 12 July. 09
Although Gen Didier's report sounded positive, for their part, the MLAs have presented their concerns about such operations.
For the general Didier Etumba, these operations are proceeding well: "Since (the operation) Umoja Wetu until today, more than 800 FDLR have been killed. Especially during the preliminary stage, 412 FDLR have been killed since the official launch of the operation, there are already 245 FDLR killed in North and South Kivu. Over 250 FDLR were captured and more than 110 dependents were recovered, "he told an audience made up of MLAs, members of the provincial government and some army officers.
As much as knowing that hundred of armed Hutu extremists are being defeated provide some kind of relief to many people in the great lake region, one should always approach this kind of report with more caution given the inaccuracies of military reports during the time of war.
After this meeting, members of the provincil legislative Assembly were so far satisfied with the result of the Kimia II operation. It remains to be seen though whether Kimia II will be more successful in S.Kivu than its Umoja I version in N. Kivu.
In the meantime, people can cautiously celebrate the slow and progressing defeat of genocidaires. Who knows, may be their evil days are coming to the end!
Journal Minembwe
Posted by Minembwe at 6:46 PM