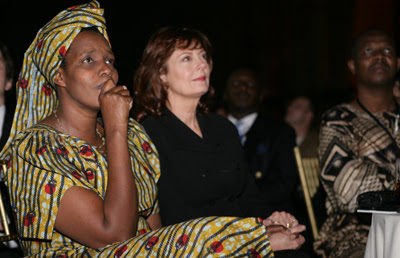 In 1998, Rose Mapendo was sitting on the concrete floor of a Congolese prison cell summoning up every ounce of courage, strength and intellect to protect her children. Almost ten years later, she has used that same determination and drive to help protect and rescue countless thousands of fellow refugees of genocide, and this April was honored for her humanitarian outreach at the 5th Annual Volvo for life Awards ceremony in New York City. Volvo named Mapendo "America's Greatest Hometown Hero" and awarded her a $50,000 charitable contribution and a new Volvo every three years for the rest of her life...

Mapendo, a Tutsi, was imprisoned and tortured by Congolese soldiers in the wake of the Rwandan genocide. Following 16 months of daily confrontations with death, witnessing the torture and execution of her husband and giving birth to premature twins on the floor of her cell, Mapendo and her nine children ended up in a refugee camp in Cameroon, from where she resettled to Phoenix, Ariz. Once safely established in the U.S., Mapendo helped found Mapendo International with the man responsible for her rescue. Mapendo International works with the U.S. Department of State and the United Nations to identify and assist Africa's forgotten, those who are at risk of falling through the cracks of humanitarian aid efforts. The organization helps these people through its medical clinic in Kenya and through a rescue operations initiative, identifying at-risk individuals, families and groups of refugees and working to get them out of danger.

Held at the world famous 42nd St. Cipriani on April 5, the Volvo for life Awards ceremony was the climax of the largest-ever national search for and celebration of everyday heroes, with Volvo Cars of North America providing $1 million annually in awards and contributions. This year, in honor of the Awards' 5th Anniversary, Volvo selected the top five heroes from every state in America and asked the public to visit www.volvoforlifeawards.com and vote for their favorite unsung hometown hero. Volvo received hundreds of thousands of votes from across the country.

"The heroes selected as this year's honorees have incredibly moving and powerful stories that symbolize Volvo's core values of conscience, care and character and we are exceedingly proud to have the chance to honor them," said Anne Belec, president and chief executive officer for Volvo Cars of North America. "It's hard for anyone to imagine living through what Rose and her family had to endure, but to then go on to help other victims like herself is truly inspirational. She gives Africa's forgotten refugees a voice and we hope this recent recognition will help America listen."
Geri
Source: http://www.goodnewsnetwork.org/inspired/individuals/volvo-hero-2007.html
Posted by Minembwe at 6:24 PM

Bravo, you were visited with an excellent idea

I apologise, but, in my opinion, you are mistaken.