WHEN FDLR issue Documents, WHO IS IN REAL CONTROL OF DRC, PPRD OR FDLR? 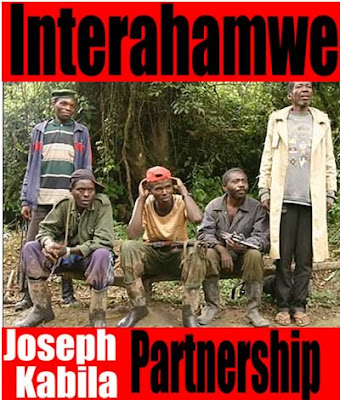 MAY BE THE POWER IS SHARED BETWEEN THE PPRD AND FDLR, BUT WHO ELECTED THEM?

It is unthinkable, but true; FDLR, a rebel movement responsible for genocide,and mass murder of million civilians, supposedly refugees in a country known as the Democratic Republic of Congo, indeed so democratic that even strangers and murderers such as Interahamwe have an unquestionable power to the point of imposing their rules and demanding and issueing document in a country that is not theirs! There is no doubt that these genociders forces known as FDLR have an influence over the Kinshasa government, but to the point of controling some territories unchallenged? this is a mysterious alliance with the DRC's ruling elites.
The following information has been reported by FREE UGANDA, and should chock every one, particularly the congolese and all neighboring countries.
According to that report, "a Congolese political leader has said that militias of the Democratic Forces for the Liberation of Rwanda (FDRL) are levying taxes on Congolese citizens in eastern DRC". As a way of expressing his deep disappointment in the currently regime, but somehow scared to tell all, he said:
"We are deeply concerned with the current situation .these militias are now imposing taxes on us and they are the ones responsible to give us travel documents whenever we want to travel out of our own region," Paulin Shetebo Kabulila, who hails from Walikale region of the eastern Democratic Republic of Congo (DRC), said.

Kabulila said that FDLR controls 75 percent of Walikale's 23, 000 square kilometer area. Kabulila, who is the Provisional Coordinator of Christian Democrats Convention (CDC) party in North Kivu, was speaking during an exclusive interview on Saturday.

"We cannot sit back while these militias control our country; they are pillaging our property and raping our wives and daughters. The government that we voted into power also seems to have failed us because I think there is lack of political will to rescue us from this plight," Kabulila said.

I wonder whether one can control Walikali a mineral deposit untouched, and not really be in power in Kinshasa. Does FDLR knows something about Kabila that the majority of Congolese do not KNOW? CERTAINLY. IT IS THE NATURE OF THEIR ALLIANCE! The question is what is their limit? and who really controls Congo?

Source of information and picture: Freeuganda.com
Posted by Minembwe at 4:55 PM