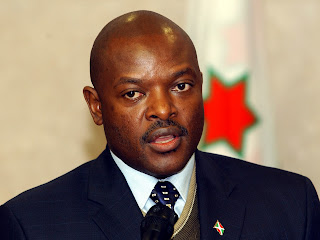 THE INTERNATIONAL COMMUNITY IS CALLED TO URGENTLY INTERVENE IN PREVENTING A GENOCIDE OF TUTSIS IN BURUNDI.


Some of the International Community members are already alarming the world leaders to take action in preventing an under-way preparation of genocide of Tutsis in Burundi. Those who doubt that history repeats itself, especially when it comes to the fate of Tutsis in the great lake region can simply ready the following informational documents by non African actors:

The United States is alarmed by the escalating violence in Burundi and dangerous, irresponsible rhetoric on the part of the government, loyalist militias, violent anti-government forces and criminal elements. The United States will support the region and our partners in the international community so that those who commit or incite violence are held accountable.
We are deeply concerned by President Nkurunziza’s speech of November 2nd, in which he pledged to use violent methods to have security forces search homes for weapons and opposition figures within five days. The continued sowing of a climate of fear and tension through such language and the use of such measures only prolongs and deepens Burundi’s political and security crisis. The United States expresses its extreme concern that the five-day ultimatum issued by the President will trigger widespread violence beginning this coming weekend.
We are also deeply disturbed by reports that incendiary and divisive speech is being used by other government officials. The President of the Burundian Senate, Révérien Ndikuriyo, has reportedly invoked the language of horrors the region hasn’t witnessed in 20 years. Whether in Kirundi or English, this language is terrifying: “You tell those who want to execute the mission: on this issue, you have to pulverize, you have to exterminate – these people are only good for dying. I give you this order, go!”


Such dangerous speech and the President’s call for a widespread, indiscriminate security crackdown exacerbate an already volatile situation and risk inciting even greater violence. We call on the Government of Burundi to allow immediate, unfettered access for African Union human rights and security monitors, and to act immediately on its stated commitment to participate in an internationally-mediated dialogue outside of Burundi in pursuit of a consensual path toward restoring stability and ending the climate of fear in the country.

Now, if you are still not convinced, may be the following excerpt from those preparing to execute the genocide might convince you:
Here’s an excerpt from a speech by the Senate president, Reverien Ndikuriyo, to heads of security of local neighborhoods (the translation isn’t idiomatic, I’m afraid):
You should go and warn them so that tomorrow there are no regrets. I am telling you clearly: give clear-cut orders to your subordinates, tell the heads of the groups of 10 households. If there are guns, collect them. If there are grenades, also collect them…You must not go into the bush because if you dare, we will not spare you. The bush is already mined and reserved for something else. You must stay at home. You will die here, at home. We shall settle everything right here, at home. Moreover, we shall not have any regard for feelings when it is time for action! I am telling you this clearly….
If you hear the signal with the directive that it must come to an end, emotions and tears will be useless! That is how it is going to be. You are heads of neighborhoods. Go and speak to the residents of your respective neighborhoods. If somebody says, “I am ready to die,” then you will tell those who will come to carry out the mission: “you should spray this area,” these people deserve to die! I am giving you the order, go!
End of quote.
There you have it, from the horse's mouth: a genocide of Tutsis, again being cooked while the whole world is clearly watching and closely following as they did 20 years ago when a million of Tutsis in Rwanda were being slaughtered by the rugs_killers of Tutsis in the region. How long will Tutsis be left to die every time a bloody regime decides to? I also echo those who are calling for an immediate action to stop the madness of blood shedding of innocent people in Burundi. Please use your mighty and influence at least once to do the right thing!
Tutsis have suffered enough, they need to also live. May the Almighty God intervene and prevent this horrible event.