IS MULENGE DEVELOPMENT FINALLY TAKING OFF? 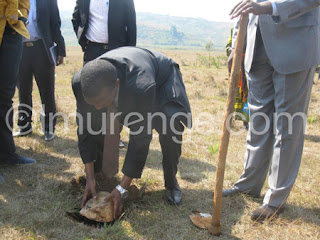 For more than a decade, the political officials from the Banyamulenge community had a total amnesie concerning their homeland. Motivated by shame and embarrassment, our politicians are awakening to a social consciousness, despite the fact that they had been quite obliviant to the community demand and pressure asking them to invest just a little bit of their resources in their homeland's basic infrastructure.
Minembwe is for sure in the process of economic growth. So, it makes sens that everyone is interested in building his house there. This is totally an act of zeal for one's homeland as much as it is a maratton to snap whatever is still available to grab.
Nonetheless, we command their long overdue initiative as hope that it is not another show for the photo outlook.
Although the Banyamulenge society by in large did not have a big issue of hunger and access to basic education as it is often the case in many other African rural communities, we can however state that Mulenge has always suffered  improved health, and access to safe water, sanitation lack of roads not to mention basic civic services that other communities enjoys. These any many more are definitely inputs to economic growth and further development of any society.
One cannot fail to mention how Mulenge has never been empowered with human capital, infrastructure, and core human rights particularly for women, and children, mostly girls.
The sad reality is that although Mulenge has contributed immensely in the national economic and human development of the DRCongo, the DRC government through its extremist officials has always made sure that Mulenge is never developed. It is well known that Mulenge produce a lot of minerals, and beef that contribute to the economic growth of the region. It should also be noted that the security force of the DRC government is largely due to the strong and brave sons of Mulenge who occupies high military and security rangs within the Congolese national force.
Although this has been a double sword for Banyamulenge people. Nonetheless, the Congolese officials, dominated by extremists have always managed to ensure that there will be no government funded initiative for infrastructure, health, and better education widely available in Mulenge since the independence. This did not change even when some of the sons of  Mulenge such as Azarias Ruberwa who was once the Vice President of the DRC, Bizima Karaha, who was once the minister of foreigner affaires, Moise Nyarugabo who is still a Senator, not to mention few who were ministers and under secretary in various ministries. Despite the fact that these individuals ascended to power and had access to the decision making institutions did so little if not nothing to uplift their mother-land Mulenge from poverty and isolation.
What is even so sad and embarrassing is that all the prominent Banyamulenge politicians have not even build their homes in their own villages. But have built their houses in various capital cities in Africa.  In fact, until recently they rarely even visited their motherland
But thank God things seem to be slowly changing. There are few people now who are securing productive and decent employment through personal initiative. Many people have started flowing into Minembwe for many what seems to be mainly religious events. But in a way, this slowly promotes economic growth, raise living standards, and increase technological sophistication of Mulenge.
Recently, we learned that finally the Mulenge political leaders are opening up their eyes and realized that they are the last one to demonstrate their interest and actions for Mulenge development. As a competitive act, they all came to symbolically lay their foundation stone in Minembwe. It remains to be seen whether they will seriously follow through with construction.
However, for those of you who hearts and minds are for the development of Mulenge, these are some of the initiatives that you may consider undertaking to develop our mother land:
The essential infrastructure services include:
Further more, the following should also not be left out:

·        Equal rights, including reproductive rights, for women and girls.
Otherwise the sad reality is that: in Mulenge, adults are dying of AIDS and tuberculosis, without hope of treatment. Farmers toil but do not even produce enough food to feed their families because most of them are old people. The entire youth population has left the area.  In Minembwe area, the soils were long ago depleted of nutrients, especially nitrogen. The rains fail, and there is no backup irrigation.
We need a concerted and much more coordinated effort for the development of Mulenge, not just religious events that seem to be like a competition among religious leaders.