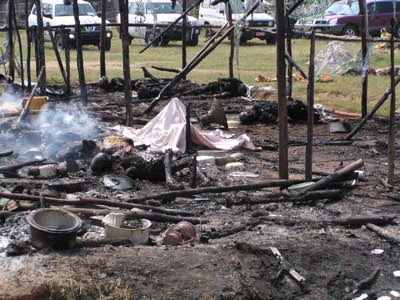 Five years after the Gatumba the Massacre of Congolese Tutsi “Banyamulenge” refugees: Has any thing Changed lesson?

Starting August 13th, 2009 all Banyamulenge community around the world will be commemorating the tragic massacre event at a refugee camp in Burundi, 13 August 2004.

On 13 August we commemorate the 5th anniversary of the Gatumba massacre, when a group of gunmen crossed the DRCongo boarder into Burundi, from the Mayi mayi and FNL extremist group, shot and killed 168 women, children, and men; injured over 500 people in a refugee camp of Gatumba in Burundi. The Agatha Rwasa’s PALIPEHUTU-FNL terror group claimed responsibility immediately after.

Although a UN report on the Gatumba massacre confirmed that the killings were conducted by PALIPEHUTU-FNL together with other negative forces from the Democratic Republic of Congo and Rwanda, Agatha Rwasa, the head of the FNL party in Burundi, is still walking free as though nothing happened. It has become a UN culture to purposely ignore the fate of Tutsis in Africa. It has willingly refused to intervene and stop the genocide of Tutsis in Rwanda in 1994, while it was happening at their watch.

Few years later, it happened again, this time in the refugee camp under the supposedly UNHCR protection camp. Unfortunately, they were Tutsis again, and UN had no interest in protecting them. Therefore, expecting that the same organization that has made it, its principle not to intervene whenever it is a Tutsi group in danger, it sounds very naive to expect UN or the international community to prosecute the perpetrators of Tutsis killings.

The Netherlands has shamefully, demonstrated its despicable act of arrogance, and indifference by offering to protect Agatha Rwasa knowingly exactly his top responsibility in the crime against humanity. But, at the world's disgrace, the Netherlands still calls itself a human right protecting country, hosting the International Court of Justice, what a paradox!

In North America, the event will be commemorated in NewHamphire, U.S.A, and Winnipeg, in Canada.

To learn more about the USA Commemoration click here

Hakiza
Posted by Minembwe at 1:10 PM